When we talked about Dalton’s atomic theory, we said it was the cornerstone of modern chemistry. Atoms and compounds are the building blocks for all of the materials we encounter on a daily basis. It was however, an oversimplification: the reality is that the millions of compounds we know today are composed only of a small number of elements. Let’s consider how we describe the chemical composition of a substance is terms of atoms.

A chemical formula is way to express the proportions of atoms that make up a particular compound. We have mentioned the compound water many times in past lectures so let’s consider another compound. Consider the formula for aluminum sulfate; it’s a compound with the formula Al2(SO4)3. This means that the compound is composed of aluminum and sulfate in a 2:3 ratio. A simpler compound, NaCl has no subscripts; this means the ratio of sodium to chloride is 1.

A molecule is an electrically neutral compound consisting of two or more atoms covalently bonded together. The nature of these bonding forces will be discussed in detail in later lectures. Molecular substances are substances that are composed us molecules. Molecules in substances are extremely small. Even a minute sample of a molecular substance contains many trillions of molecules as we’ll see when we look at Avogadro’s number.

Molecular formulas give us the exact number of different atoms of a given element contained in a molecule. Hydrogen peroxide is a simple peroxide compound (a compound with an oxygen-oxygen single bond) with 2 hydrogen atoms and 2 oxygen atoms. Thus it is distinguished by the molecular formula H2O2. Our favorite example, water is always composed of hydrogen and oxygen in a 2:1 ratios, thus its molecular formula is H2O.

Ethyl alcohol, or ethanol, is always composed of carbon, hydrogen and oxygen in a 2:6:1 ratio. Problems arise when other compounds share the same molecular formula, for instance, dimethyl ether has the same formula as ethanol, but is a different molecule.

A structural formula is a formula that conveys some information about how the atoms are bonded to one another. This can be used to differentiate between two compounds. If we write the molecular formula C2H6O as CH3CH2OH, we are talking about the molecule ethanol, or when we write it as CH3OCH3 we mean dimethyl ether.

Molecules have fixed equilibrium geometries, bond lengths and angles. Atoms are connected to molecules in definite ways and exhibit spatial arrangements as well. Thus both molecular formula and structure of the molecule are important factors in determining its properties and reactivity. Chemists often create three-dimensional models in order to visualize the shapes of molecules. A simple ball and stick model may be sufficient for conveying bonds, but a three dimensional shape gives us a more realistic feeling of the space that is being occupied by the atoms.

Elements can be molecular substances

Polymers are large molecules that are made of repeated subunits. The subunits are called monomers, monomers are single molecules that bind together chemically to form polymers (many). Polymers have a large range of properties; because of this we frequently encounter both synthetic and naturally occurring polymers in our everyday life. Wool and silk are examples of naturally occurring polymers. Glucose is a monomer and our primary source of energy; it can polymerize to form more complex carbohydrates like starch. Polymers can also be synthesized, examples include, nylon for stocking, Kevlar for bullet proof vests and Teflon coating for pots and pans. These are all examples of artificial polymers. From these examples it should be obvious polymers are very important molecular materials for a wide range of applications we use in everyday life.

Many substances we encounter are molecular, but others are composed ions. Ions are electrically charged particles that are obtained by adding or removing electrons from an atom or a molecule.

In order to form some compounds atoms become ions. As a general rule of thumb, metals tend to lend electrons to nonmetals. This occurs when a metal such as sodium approaches a nonmetal such as chlorine. In the formation of sodium chloride, sodium loses an electron and chlorine gains an electron.

Atoms that pick up an electron become negatively charged and are called an anion. Atoms that lose an electron and become positively charged and form a cation. I always differentiated between anion and cation, because the t, in cation looks like a + sign which indicates positive charge. When the sodium ion in our example is the cation and the chlorine ion is the anion.

Formulas for ionic compounds are written by giving the smallest possible integer number of different ions in the substance. For example, sodium chloride consists of Na+ and Cl–, therefore its formula is NaCl (1+-1=0), as well already know. Aluminum chloride is a compound that consists of Al3+ and Cl– in the ratio of 1:3 (3+3(-1) =0). Therefore the formula is written as AlCl3.

The formula unit is the empirical formula for any ionic or covalent compound. All substances, including ionic compounds exist in an electrically neutral state. From this fact we can write chemical formulas based on the formulas for given ions.

Organic compounds are molecular substances that contain carbon and can be combined together with other elements such as hydrogen, nitrogen and oxygen. From a historical standpoint, organic compounds were thought to be restricted to only compounds that could be produced by living things. Until, a German chemist, Friedrich Wöhler (31 July 1800 — 23 September 1882) synthesized urea an organic compound found in human urine (accidentally, he was actually trying to synthesize ammonium cyanate). He demonstrated that a given compound, whether synthesized in a lab or from a living thing is identical. This synthesize disproved a theory known as vitalism. Vitalism was a doctrine that basically stated that living things are fundamentally different from nonliving things because they contain some special nonphysical element that is unique to them. He proved them wrong, thus the field of organic chemistry was born.

Organic compounds make up the majority of all known compounds. In organic chemistry the simplest compounds are known as hydrocarbons. These are compounds that consist entirely of carbon and hydrogen. The majority of hydrocarbons that are found on earth naturally occur in crude oil. Crude oil is made up of decomposed organic matter with an abundance of carbon and hydrogen bonded together in seemingly limitless chains. In order to use crude oil for energy, plastics, etc. it must be refined into small, more utilizable compounds.

In organic chemistry, the properties of a given molecule are determined by groups of atoms that have characteristic properties, known as function groups. Functional groups are groups of atoms or bonds within organic molecules that are responsible for the characteristic chemical reactions. We mentioned ethanol earlier. Ethanol isn’t the only organic compound that’s an alcohol, any molecule that contains the –OH functional group is considered to be an alcohol. . Rubbing alcohol is a good example; it contains isopropyl alcohol which has a wide range of uses apart from surgical spirit.

Let’s first consider how we go about naming ionic compound:

Monatomic ions are ions that consists of single atom (hint: mono). Here are a few common monatomic ions that are in the main group of the periodic table. 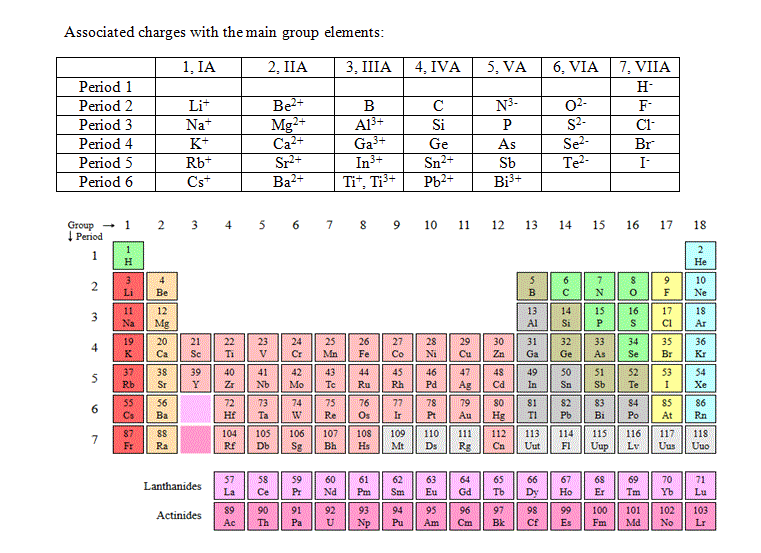 First, we must develop rules for predicting charges on monatomic ions

2) Some metallic elements can form more than one cation. These elements tend to have charges equal to the group number minus two in addition to forming a cation with a charge that is equal to their group number. Lead is a good example it’s in group IVA and forms cations with charges 4 and 4-2, Pb4+, Pb2+.

3) Elements in the transition area of the periodic table elements tend to form multiple cations. Iron forms the cations Fe2+ and Fe3+.

How atoms are bonded together will gives us an idea of the type of reactions these compounds will undergo and how they interact with other compounds. We’ll see entire lessons devoted to bonding and chemical reactions in future lessons.

Understanding how the elements position on the periodic table in respect to its charge is an important concept. The main group metals and nonmetals behave in predictable ways. We’ll look next at general rules and concepts in terms of naming compounds then we’ll look at calculations involving chemical formulas and equations.

This fifth video is a review of the first four lectures

Libertopia is a city based on the principals of liberty and self-government, it has 8 million people with a daily water consumption of 656 liters of water.  Calculate the mass of water consumption, in metric tons per year (density of water is 1 kg/L; one metric ton is 1000 kg).

This Khanh lesson offers an good introduction to periodic trends and bonding, I highly recommend watching it so you have a solid understanding of an elements behavior in relation to its location periodic table: