In our example when we were determining the amount of NaCl that would dissolve into 100.0 grams of H2O we rounded the number we reported to 36.5 grams.  Rounding is the procedure of dropping off insignificant digits in a calculation and adjusting the last digit reported.  The procedure is simple and involves the leftmost digit which you plan to retain:

1) If a digit is five or greater then you add 1 to the last digit to be retained and drop off the remainder of the digits to the right of that number.  36.499975 rounded to three significant figures becomes, 36.5.

2) If the digit is less than five, simply drop off the remainder of the digits to the right of the number to be retained.  36.449975 rounded to three significant figures becomes, 36.4.

It is the responsibility of those involved in the sciences is to communicate our findings in a manner that can be understood.  We do this by reporting our findings in units of measurement.  Measurement must be performed and reported in a standardized manner in order to be effectively communicated.

In the last lecture we mentioned that we can measure qualities such as length, volume or mass and that measurement is expressed as a number.  We didn’t mention that in order for a measurement to make sense it must include an accompanying unit.  The unit gives us information about the nature of the measurement-for instance, measuring in kilograms is different than measuring in feet.

Early measurements were based on the human body, i.e. foot etc.  As science advanced, a standardized system of measurement needed to be developed.  Thus, in 1791 a study committee for the French Academy of Sciences devised the metric system.

The international system of units (SI) is the modern form of the metric system developed by the French.  It’s a system of units built around seven base units.  It’s a measurement system that has nearly been adopted globally.  In the United States; however, this system is not common outside of science and medicine.

Base units are like the building blocks of SI, where all other measurements are derived from.  Prefixes are added to the unit to produce a multiple of the original unit.  SI prefixes are used to indicate the power of ten.  For example, the SI unit of length is a meter, and 10-2m is called a centimeter.

SI Base Units (memorize this)

The meter is the SI base unit we use to represent length.  When combined with the appropriate SI prefix, the meter can be used for any length of measurement.  For a very small unit we use can use nanometers (10-9meter) or even picometers (10-12) if we wanted to measure something as small as nuclei diameter.

Kilogram is the base unit we use to measure mass and comes with the prefix kilo (1000 grams) already attached, this is unusual because all the other base units do not contain a prefix.  To form other SI mass units we add prefixes to the gram (g).  For instance milligram (10-3grams) is the measurement we see often on prescription drugs.

The second is the SI unit we use to measure time.  Prefixes like mili, nano and pico can be attached if we are measuring a very rapid event.  For instance, it takes 1 picosecond for light to travel in a vacuum approximately 0.30mm long.

From the SI base units for standard measurements we can derive other units.  The number of derived units is unlimited and are obtained by means of mathematical operations.  Volume and density are ones we’ll consider first and later we’ll look at pressure and energy.

Volume is a quantity of three-dimensional space that is enclosed by a boundary and can be quantified by the SI derived unit the cubic meter (m3).

A cubic meter is too large of a volume for most measurements in chemistry.  If we attach the prefix deci (10-1) or centi (10-2) to cubic meter, we find cubic decimeters or cubic centimeters are generally more appropriate units of measurement in a laboratory setting.

Most labware is calibrated in terms of liters or milliliters (1000 mL = 1 L).  One liter is equal to a cubic decimeter (about one quart).

Density is defined as an object’s mass per unit volume: d = m/V

Density is an important characteristic property of materials.  Density is an important characteristic to consider when choosing a material for a given application.  For example, packing materials tend to be less dense.  Styrofoam is often used in packaging applications because it’s full of air, soft and fills the surrounding area in boxes, protecting the contents inside.

Temperature is difficult to define, although we have an intuitive understanding of what it means based on our experiences.  We know that a camp fire, for instance, has a high temperature because we can feel the heat coming off of it from a distance.  What we are experiencing is radiative heat transfer from the combustion reaction taking place inside the camp fire.

Temperature is really just a measurement for hotness and is measured using a device called a thermometer.  Heat transfer takes place when one object is hotter then another object.  The amount of heat that passes between the two objects is dependent on the temperature differential between them.  It’s also dependent on both objects’ quantity and chemical identity.  For instance, metals tend to be good heat conductors and a larger mass will allow for greater heat transfer.  So, we know that temperature and heat are related.

The Celsius scale was developed for scientific use.   On the Celsius scale 0 degrees is the freezing point of water and 100 is water’s boiling point.  The SI base unit for temperature is actually Kelvin, which is an absolute scale.  On an absolute temperature scale, the lowest theoretical temperature that can be attained is 0.  The problem is there is no way to measure it since at absolute zero there are currently no electronic devices that can operate under these conditions.  The Celsius and Kelvin scale have equal size units, only 0oC is equal to 273.15 K.  This makes it easy to convert from one to the other.   Whatever your temperature is in degrees Celsius just add 273.15 to get to Kelvin.  Here is the formula: 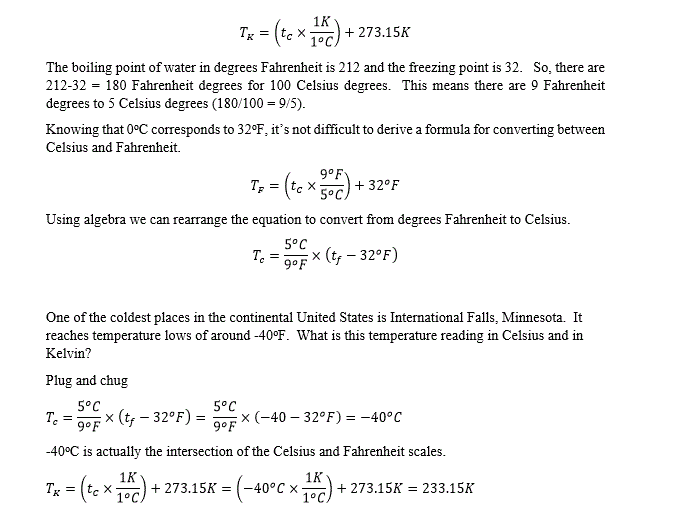 Use and Misuse of Units

It’s just human nature to leave out units when working with measurements, but this is a good way to get yourself into trouble when working on chemistry problems.  It’s extremely important to keep the units associated with the numbers throughout the problem and pay close attention to them.  This will help you determine if your answer is being presented correctly.  It should go without saying quantities cannot be added or subtracted together unless they have the same units.  If you’ve performed your calculation correctly and keep the units throughout the problem, the units of your answer should reflect the nature of what you are trying to calculate.

We know that measurements of different physical significance cannot be added together.  For instance, you wouldn’t add your time traveled in a car to the speed you’re traveling.  You’d also need to convert 5 inches to centimeters in order to add it to 6 centimeters.  Measured quantities of various types and units can be canceled during multiplication and/or division operations.  The units and the numbers must obey the algebraic laws of multiplication, squaring and division.

The method of keeping the associated units throughout the calculation is called dimensional analysis.  Consider you want to determine the volume of a cube, given L, the length of its side.  You know that volume is equal to length cubed, L3, if L = 10 cm, then V = (10cm)3 = 1000 cm3.  Our unit of volume in this case is cm3. Keeping the units throughout the problem, takes the guess work out of what the unit of measurement is in our answer.

If we were asked to report our unit of measure in liters, we know that 1 L = 1000 cm3 so converting from cm3to liters isn’t difficult.

cm3 cancel and our answer 1liter.  The ratio 1L/103cm3 is called a conversion factor. Conversion factors allow you to convert between different units of the same measured quantity.

Measurement of different physical properties of matter is really an important practice in chemistry and all other sciences a like.  Having a standardized way of reporting our measurements in science allows us to communicate our findings to one another.  The importance of dimensional and unit analysis cannot be stressed enough.  These are extremely important concepts, and you’ll find that good scientists and engineers deal a lot with units.  What separates a good engineer and scientist from the rest of the pack is his ability to make sense of a measurement or calculation just by looking at the units.